A few years ago I was involved in raising lots of money to build a data centre in Thailand. During that time I met David. David told me about an island called Flores, in Indonesia, where he and his associates were building hotels and the like but – and this caught my attention even then – with a difference.

In The Shock Doctrine, Naomi Klein describes how, in the aftermath of the 2001 tsunami, global hotel chains used the devastation of coastal communities in Sri Lanka as an excuse for a land grab. Those who had already lost their livelihoods and homes were shoved back to the inner shores while the luxury resorts fenced off beaches and made damn sure that the last thing you’d see on the beach would be the fisherman and his family who used to live there, and the last means of subsistence those fishermen would have, would come from the seas they’d once fished. As to the environment – well, as long as it looked nice, pump raw sewage out to sea and no one would know. This is one of the reasons I avoid beach resorts.

David wanted his company to be everything that the big chains are not. He wanted to include the communities, to make sure that the developments would accord with their wishes – most communities are keenly aware of the threat to their environment that development brings – and that would offer a future for their children.

I was impressed by his passion, but had neither the time nor the available money to get involved. However – a story for another post – the data centre didn’t come off, one thing led to another, and the next thing I knew, I was meeting David’s management team: 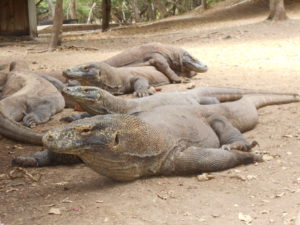 Well, not quite. These are the famous Komodo Dragons. They are not at all sweet and cuddly: their drool is poisoness enough to kill a grown man with a bite, and they are quite capable of eating small humans and large land animals. Here are some of the last guests to register a complaint: 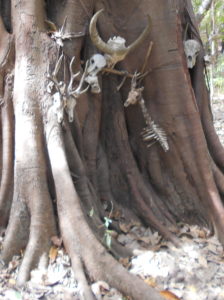 Komodo Dragons eat whatever they kill whole, bones and all, and excrete the latter. We wandered around in the company of a guide and came across a young one 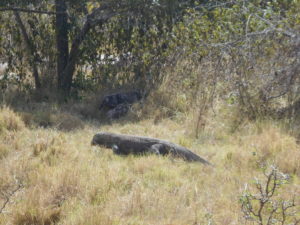 Who then sensed lunch in the proximity 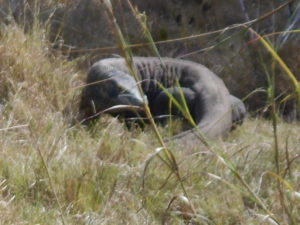 At which point we made a speedy exit .

So, that’s a major draw to the area. The dragons exist on only three islands, which collectively form Komodo National Park, a UNESCO World Heritage Site. As such it’s protected, but here’s our little area outside it: 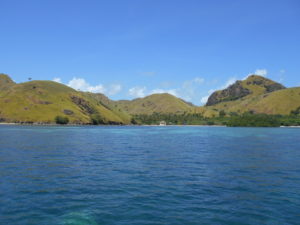 Not quite untouched, but in this filling-up world of ours, it’s as close as you get.

Here are some neighbours: 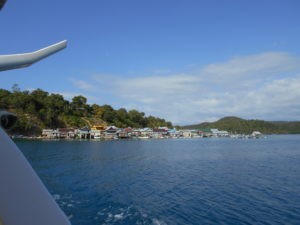 Houses on stilts in this case. The fishing communities in Flores are poor. Flores takes its name from the Portuguese, and the island is predominantly Catholic and its main export, priests (if you thought Indonesia is full of bomb-throwing Islamists, change your newspaper). However, the fishermen are predominantly Muslim and tend to live in remote bays, inaccessible by road, with minimal access to secondary education, health services and, in many cases, reliable drinking water.

So, what does David’s company intend to do with this pristine patch of paradise? Whatever it will be, it won’t be this 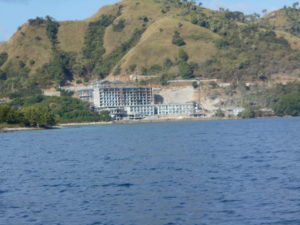 That hotel is typical of rapacious resort development. They’ve built right up to the plot boundary, have put a hideous, maximum density pile of concrete on top of it and the beach – if it hasn’t been permanently destroyed by the construction – will be a narrow strip of sand on water where, in the afternoon, you can most likely watch your very own breakfast turd float past – and those of the other 500 guests.

I bought into the company – Asia Land and Sea – and they’ve put me on the advisory board. It’s as much a responsibility as anything I’ve taken on. On the one hand, it’s a company, not a charity, and needs to make money. On the other hand, all of us on the board are committed to growing the company in a way that respects the local communities and nurtures the environment. That’s a tall order, riven with conflicts, and I wonder if I’m up to it. At least I know where I’ll end up if the management team decides that I’m not…