It’s been much too long since I’ve posted under this heading. I got into a rut. Not so much too much work as work that was fragmented. The gaps were too short to do anything adventurous with – I ended up plodding around the same worn hiking trails more to stay fit (well, slow the deterioration) than anything else. So when, over Chinese New Year, a friend offered to sail me around parts of Hong Kong that I’ve never sailed to, I jumped at the chance.

The first thing in planning any major sailing trip is, of course, charting a course and arranging supplies. We agreed on “wherever the wind takes us” for the former and, for the latter, I obtained a 3 litre box of white wine from the local supermarket, cooked up some chili con fake-carne, and we deemed ourselves planned.

There wasn’t much wind on the first morning, but we hoisted the sails for form’s sake and headed for Po Toi island, due south of Stanley. I’ve often been to the well-loved yachtie restaurant on the island for Sunday lunch, but I’d never explored the island itself. The restaurant was shut, so we anchored in the bay to the south (I hadn’t even realized there was one!), and took a dinghy to shore. 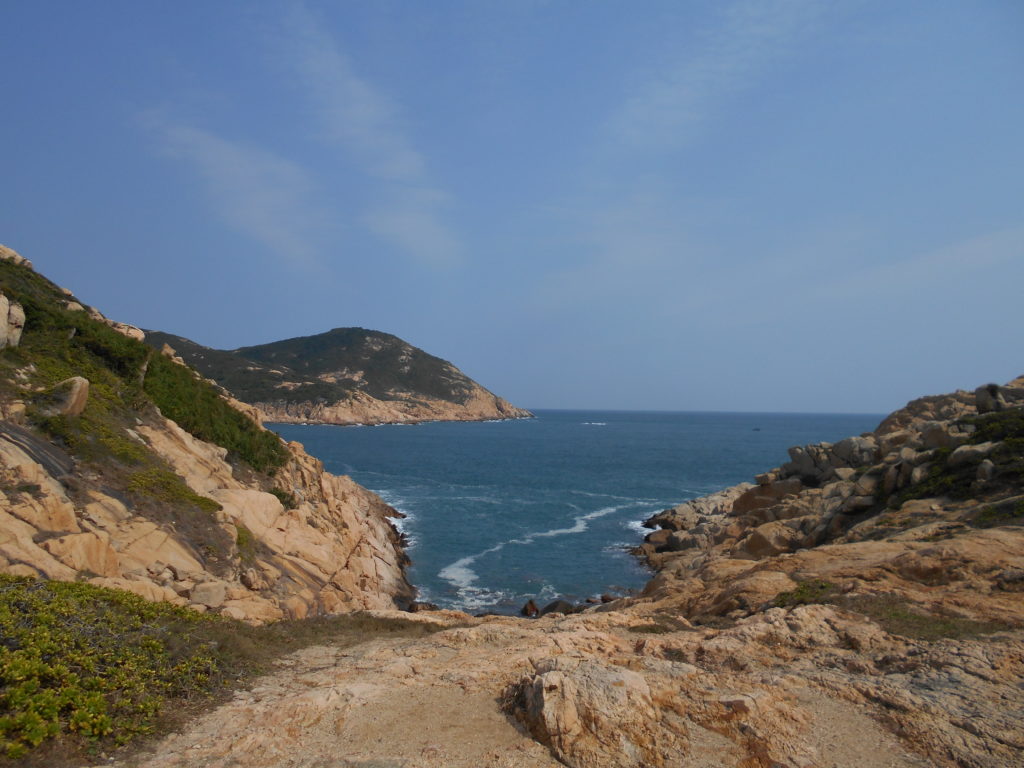 Next stop, the Philippines

That was the view south from the other side of the island – a clear sky, clear air away from the pollution of the city, and barely a thing in sight. Here are some flowers clinging on: 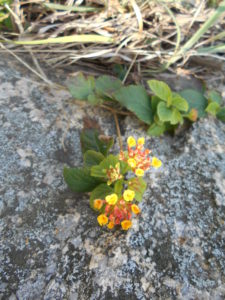 And here are some kind of cool-looking rocks 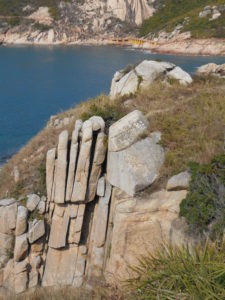 The next important thing was lunch: my host and I devoured a baguette and cheese, with tomato and, for a touch of decadence, a leaf or two of basil. But the wind was building, and there wasn’t time to waste. We hoisted sail, and set off: 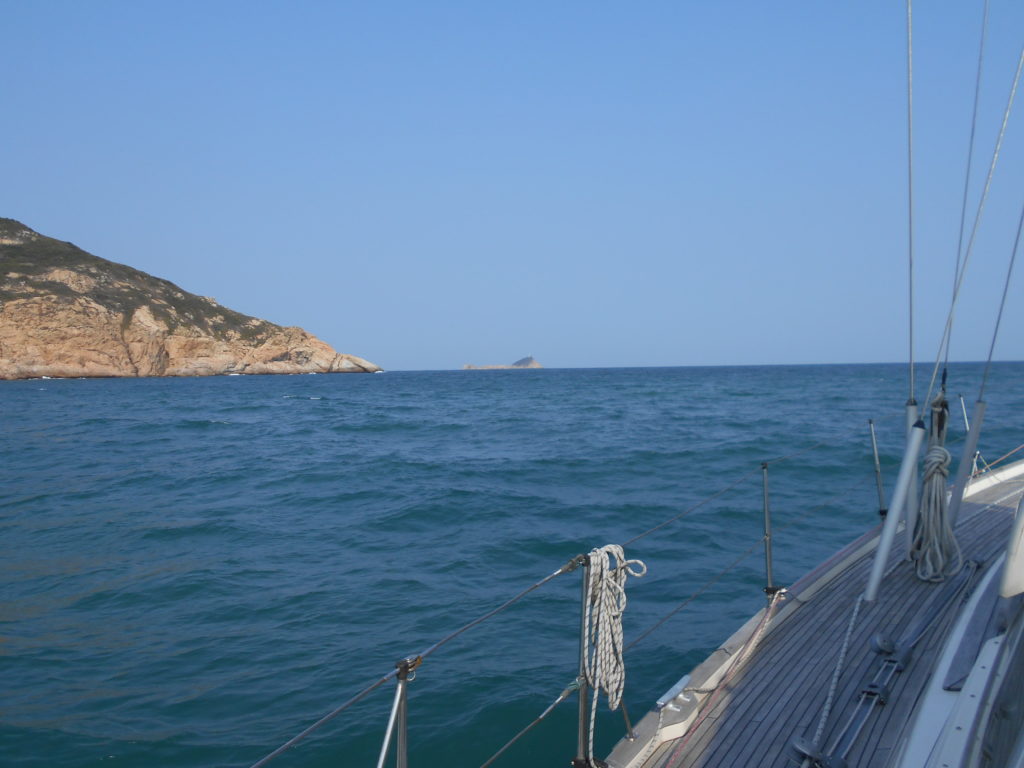 That blip in the middle of the photo is Waglan Island, a barren rock which is home to an unmanned lighthouse. There wasn’t much of a hint as to whether landing was permitted, but, by the time we’d arrived, the seas were quite bumpy (too bumpy for my snapshot to remain in focus at least) and the wind was too good to waste, so we turned around, circled Po Toi, and headed to Lamma. Once anchored on the leeward side at Power Station Beach, we consumed my chili, found the wine to be quite drinkable after the first sudden shock, and then discovered a bottle of port in the emergency supplies locker.

Next morning was a somewhat slow start, but, warmed by about a kilo of porridge, we hoisted the sails and went west. There’s a small archipelago of islands known as the Soko Islands, which I’d heard of but never been to. After a glorious reach (reaching, for non-sailors, is the most comfortable of the three configurations of sailing), we arrived in time for today’s cheese, this time with basil and tomato and between two slices of, ahem, baguette. We then went ashore, found a way to a path, and arrived at the top: 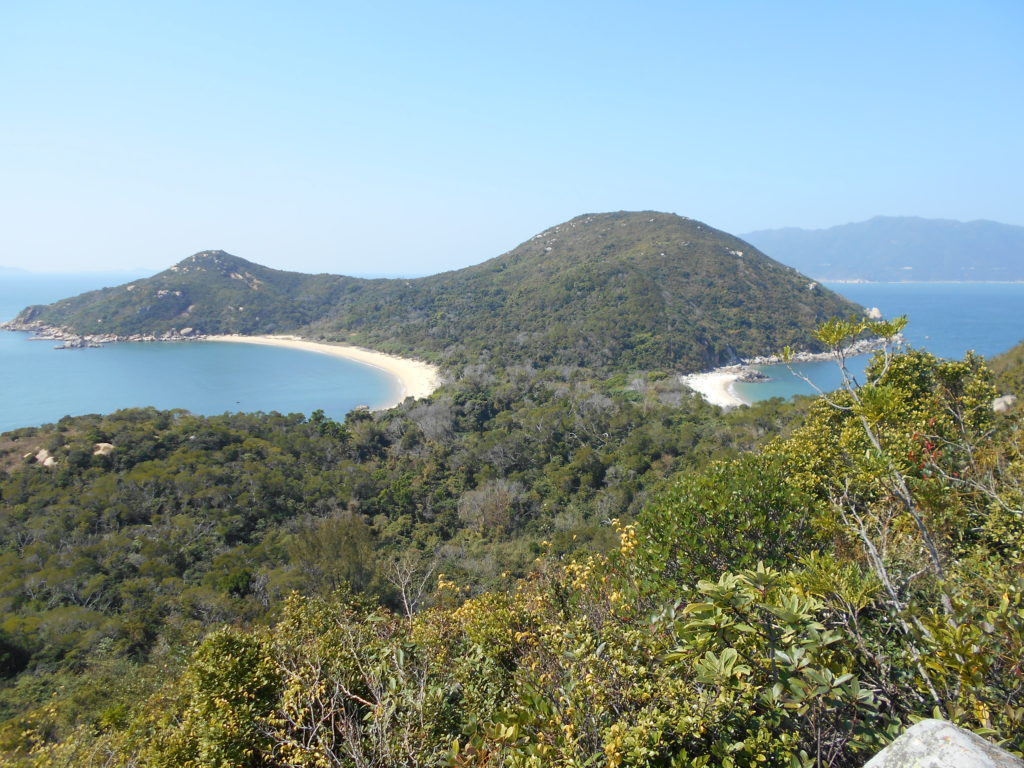 And people pay to go to Thailand on holiday. We had this to ourselves: 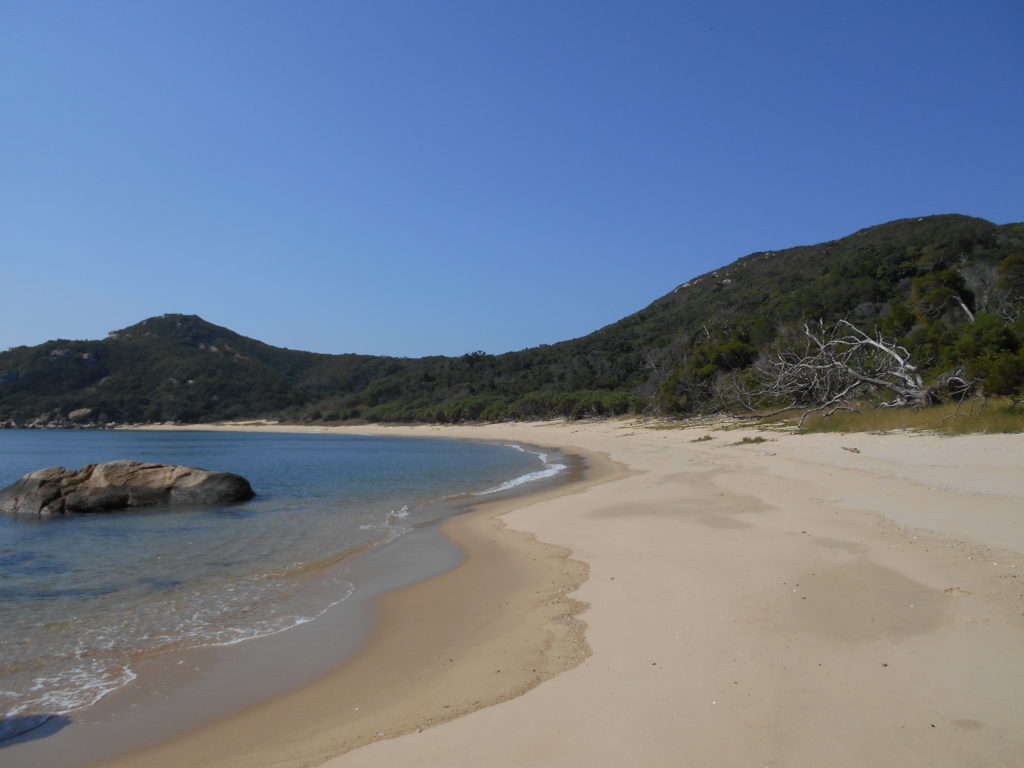 Not that it mattered as it was too cold to swim. Anyway, back on board and, after rehydrating, we motored the small gap to the southern part of the archipelago.

In the 1970s, as the war in Vietnam was winding down, the communist government started reprisals against those who sided with the Americans – which meant a significant chunk of the population of South Vietnam. Many fled, nearly all by boat, and some ended up in Hong Kong. The HK government at first refused to accept those who arrived, but no other country would have them and the government was eventually shamed by the UNHCR into providing temporary accommodation while the refugees waited to be given a home. The built-up parts of Hong Kong had no space for them, and the government put many on these islands. This is all that remains: 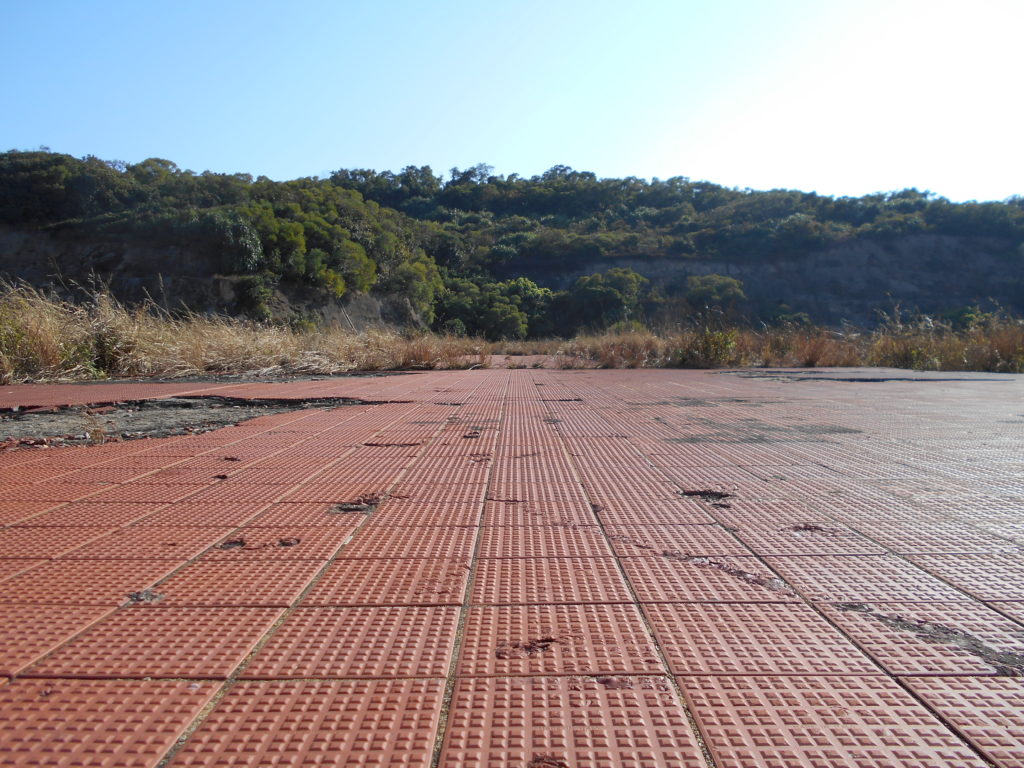 It was a lovely spot on the day that we visited, but to be stranded there for year after year as the bureaucratic wheels of resettlement ground on…

We explored, of course. We found this enchanted marsh, probably cultivated in years gone past: 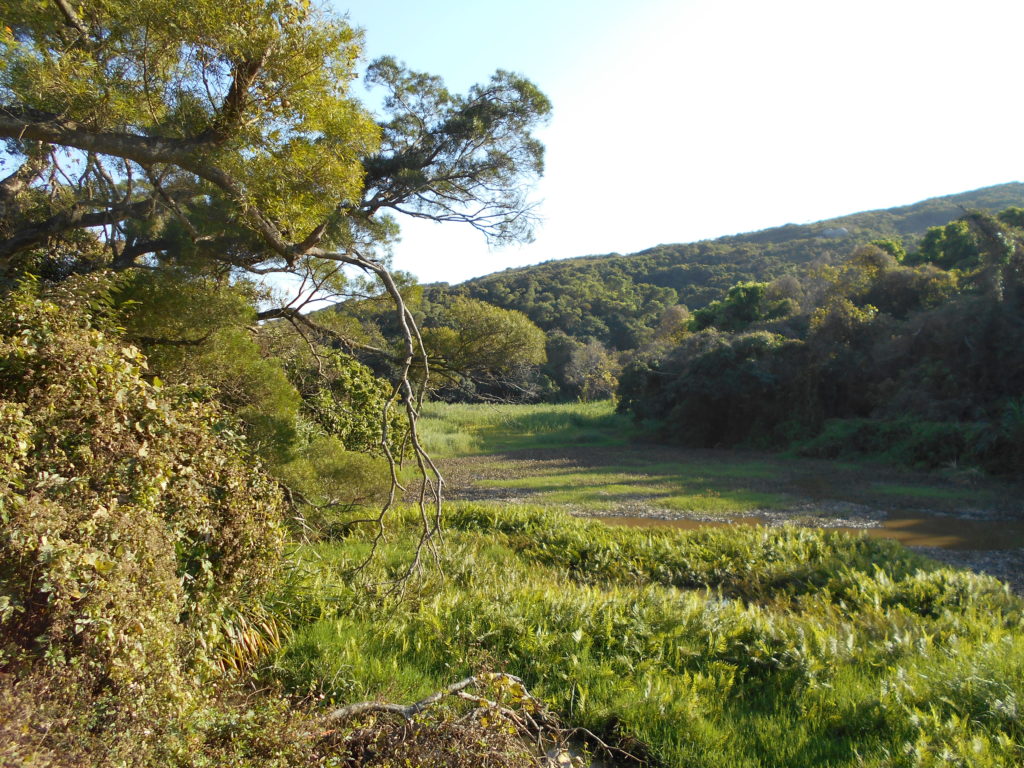 The bird life was stunning – I don’t have the skill, patience or equipment to photograph birds, but flocks of all colours swept through the foliage and across that abandoned field. The island is now completely uninhabited, and it would be a useful project to document this remote eco-system before the government decides to build something horrible there.

Back to the boat. Our taste buds were now accustomed to the white “wine” and it was the helm’s turn to cook – which he did well – as the sun went down 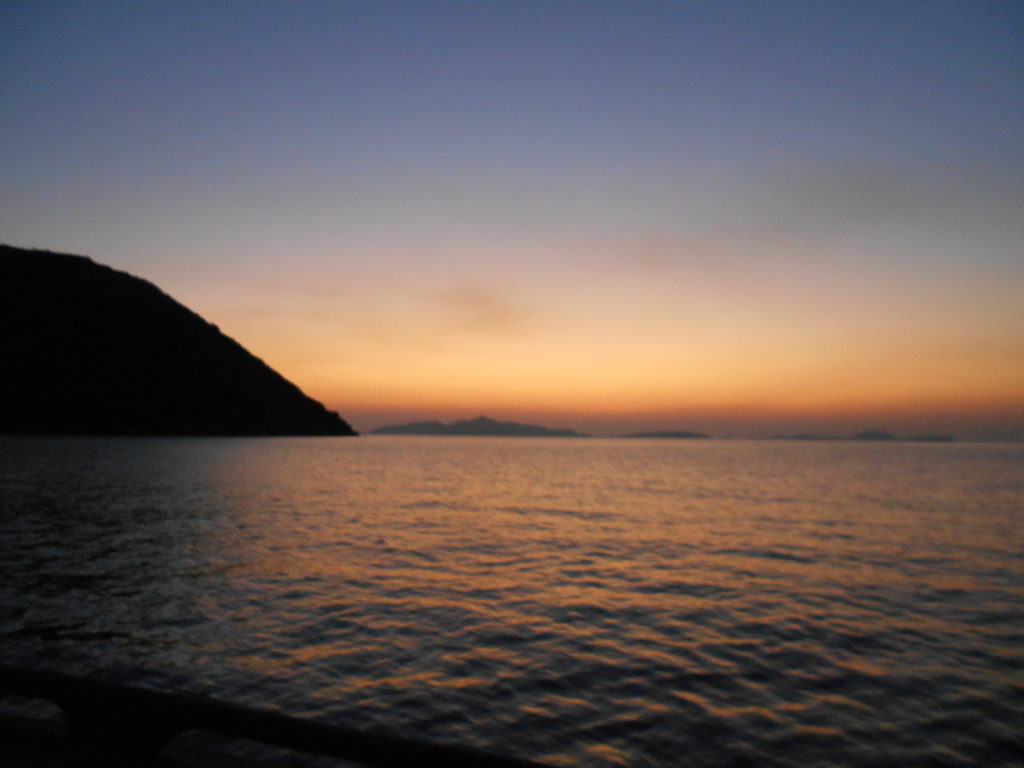 The wine evaporated all too quickly, so we decided to finish the port before it went off, only to find a bottle whisky that was similarly on the edge.

The next morning had great wind – from the wrong direction. Fortified by another necessary kilo of porridge, we set sail but, after beating (the least comfortable configuration) for the better part of two hours to make about a nautical mile of progress in the direction we wanted to go, we turned on the engine. The last day’s lunch was a welcome change – no basil so only cheese and tomato sandwiches – and we arrived back in time for my sudden re-immersion into Hong Kong: a family Chinese New Year’s dinner. The best Chinese New Year I’ve spent here for years.